#13 The Sloughs of the Mississippi River

(Note: We have decided to count the Mississippi River, one of the world’s greatest rivers, as many times as we can find a way to journey on part of it!)

On Saturday, October 25th, we gathered for lunch at the old Trempealeau Hotel in Trempealeau, Wisconsin. The hotel was opened in 1871 and sits a stone’s throw from the Mississippi River, the railroad, and Lock and Dam #6. People, trains, and barges are constantly moving past the windows of the hotel and it is not hard to imagine the French trappers who settled the area striding up to the original bar and ordering a stout drink. The town is nestled at the foot of surprising mountains — surprising for the Midwest! — and on this particular Saturday the hills were covered in golden leaves, all about to leave their branches in the first high wind. We could not believe our luck! One more gorgeous paddle before winter closed the waters…

Ian and I were joined by Jerry and Ben, (see Minnehaha Creek and Bridal Veil Falls), and Ben’s friend, Jake. We launched our twin Old Town Penobscot canoes and paddled off under a sky so blue it seemed a cartoon artist had painted it above us. This time we planned to follow a “canoe trail” that Jerry had researched. Not far into the narrow channel we found the first of the blue diamond signs and turned off to the slough. (A slough, pronounced “slew” or “slouw,” depending where you grow up, is a swamp-like land bordering a river.) The slough was narrow and twisting, and draped with trees. Every small breeze released a rain of golden leaves. The small blue trail signs were not always easy to find and the water twisted and turned, so each spotting of a blue diamond was a great comfort.

We heard animals, but saw only a hawk and a glimpse of a bald eagle, until a golden retriever came bounding out of the woods. Hunting season. Time to be careful. Suddenly the water grew thin and abruptly ran out all together. We were stuck in thick black mud. We had to drag ourselves across the muck to what was once river bottom but was now a dry sandbar filling the river bed.

Ian set off to scout the situation while we lugged our snacks to the driftwood log in the middle of the sandy stretch. Ian returned with a turtle shell and news that the river started again in the big Mississippi, and then turned inland up ahead. Should we continue in such low water conditions, or turn around while we could still float our way back to start? We ate. We drank. We discussed. We voted, and decided to head on and hope the water grew.

After twists and turns with plenty of water the path suddenly opened up and we found ourselves on the edge of a huge shallow lake. Tall reeds grew everywhere  and we set off across, not exactly certain where the trail actually directed us. No sooner had we entered the lake when a fierce wind swept up. We paddled with all our strength and went nowhere. Finally we headed toward the shoreline where the wind was cut by the straggly reeds but the water was too shallow. Back out in the wind we struggled. Ian’s hat blew across the water but Ben fished it out right before it sunk. Ian and I pulled ahead and found the very comforting blue diamond sign at the entrance to another narrow cut of water. The wind died as soon as we entered the protected channel and we pulled ashore to catch our breath and wait for our fellow travelers. We waited. And waited. Finally we heard them, SINGING at the top of their lungs. “He’s got big fat trees in his hands…” They were making up crazy verses to He’s Got the Whole World in His Hands and Ben swears they would not have made it through the wicked wind without the song. (Most of the verses I cannot repeat!) 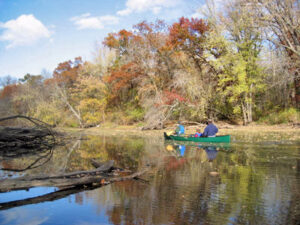 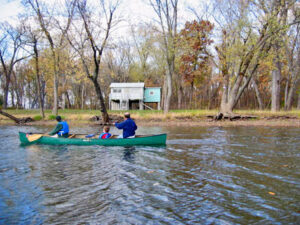 On the last stretch we paddled past more of the odd houses bordering the edge of the slough. Every cabin was perched on top of six to eight foot pilings, safe from the wrath of a rising Mississippi. The wind was chilly when we pulled into the boat slip. We were covered with mud and getting cold as we tied the boats to the car racks. Homer writes of “the rosy fingered dawn” but as we turned out on the road we found the northern sky filled with “black-clawed winter.” Like the arching reach of Mordor, we could actually see winter coming for us with its dark, cold sky. The day that began in gold edged blue ended in shivering black. But somehow we had slipped our canoes through the very last hours of fall and we were nothing but gloriously happy and tired.

This site uses Akismet to reduce spam. Learn how your comment data is processed.