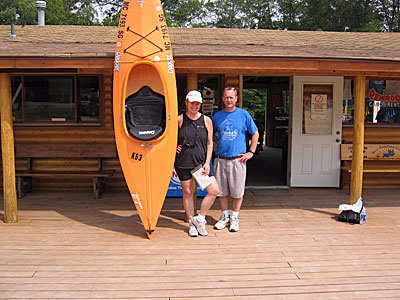 I recently had the great pleasure of speaking to some of Michigan’s finest teachers at the Michigan Summer Reading Conference in Gaylord, MI. After finishing my duties one afternoon I jumped into my car and drove 25 miles south to Grayling, MI, where I had arranged to rent a single kayak for a paddle on the Au Sable River. I arrived at Penrod’s Canoe Trips just minutes after the last available boat departure. Jim, the proprietor (and pictured here) agreed to stay open a bit later so that I could set off at once on an eight mile paddle. I remain grateful for this extension to their long day — thank you! (Penrod’s: 989 – 348-2910)

I set off in late afternoon light. There was a stiff, clothesline snapping wind bending the tree tops lining the river but down on the river’s bed the water’s surface was barely ruffled. The sky arched clear and all that moving air and slanting warm sun made the day’s end feel electric. It was Thursday and the river was empty of fellow travelers. I could not have felt more lucky, more alive, or any more happy!

Later I read that the Au Sable River is considered one of Michigan’s most beloved streams. Like several of the rivers I have been privileged

to paddle, this one is protected by the Wild and Scenic River Act. It is also the river that served as the birthplace of Trout Unlimited, one of the great fishing and conservation organizations of our country.

This river is exquisite. I knew I was in a holy place as I paddled through the narrow banks, and I also knew how lucky I was to be so silently alone in such beauty. Tiny cabins dotted the early bends in the river, and a long rope swing hung from one tree branch overhanging a sharp turn. The stream was remarkably clear, the sandy bottom rarely covered with more than three or four feet of moving water, and a steady current helped pull me east.

Along the way I passed a huge collection of downed trees, the silver pile banking a camp site on a wide turn. A blue heron leap-frogged me down the river, and in the quiet I found myself whispering to the bird about the beauties I was seeing while it fished beside me. The river momentarily straightened and I found myself in awe of a giant pine leaning out over the river ahead. This tree was one of the progeny of the Old Trees, a lone standing remnant of the great pines that had covered the fields and banks of this river. In the 1800’s the vast virgin pine forests were clear cut. Their huge cut trunks once clogged this river, scrapping away its sandy bottom as the giant logs were floated down to ships waiting on Lake Huron. Like the trees, the river suffered. Great efforts have been made to restore this river’s splendor.

This huge tree before me held the bank with muscular roots that snaked above the earth before plunging underground. Despite its size it leaned out over the river with a sense of graceful majesty and patience that I found contagious. I could see the river from the tree’s view as it watched all the season’s pass on this bit of water, year after year, ice, snow, spring melt, summer flow. This tree reminded me all over again of the quiet breathing all the trees are doing for us. Every leafy moment they are exchanging our carbon dioxide for their oxygen. Steadfast, the tree quieted me even more deeply. Quietly I paddled again. The heron followed and left this message right beside my boat before sailing off down the river. 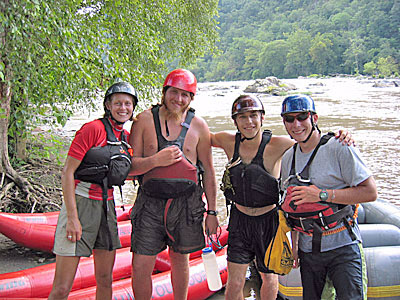 For this river I was joined by the brave and good spirited teens, Grace, Christopher, Calla, and Zoe. The Natahala Outdoor Center (noc​.com) hosts a river outfitting site near the French Broad River, a river that weaves through western North Carolina, including the city of Asheville, NC. A night of heavy rainfall had raised this Class II-III river a full 8 inches so they were not running individual “duckies,” (small individual inflatable kayaks). Instead, we reserved a five person raft for the five mile trip on this old and well known river.

The NOC is famous for its energetic and talented guides. Our guide, Ian, was certainly both but when he gave us the option of guiding our own raft down the raised river and we accepted. (When you sign up for a trip through the NOC you are taken through a short course on river safety and fitted for helmets and PFD’s, personal flotation devices.) We then boarded a big blue bus and were driven down a steep, winding road to the put-in beside the French

Broad. Giant silver inflatable rafts were blown up and set up at river’s edge. A light rain fell. All of us grabbed a paddle, climbed in, and pushed off into the current. I sat up in the back, ready to steer the first raft of my life!

We followed Ian and his raft full of fellow river riders closely. At each rapid Ian paused in the eddy and called out the line we were to trace. As bow paddler I tried my best to keep us there. I was greatly helped by Zoe who is a fine canoeist from Minnesota, and together we managed to stay off rocks. (The difference between a canoe and a raft? I found the raft to require more “reach” in order to steer the craft. And no cross draw stokes!) At a slow curve we pulled over to a high cliff and the younger members of the expedition jumped from the rocks into the river. At this point Zoe and I switched and she steered, guiding us through the rest of the rapids, including the final Class III drop pictured here!

Ian and I set off for the Loxahatchee River, located in Martin County, just south of Vero Beach, the small Florida beach town where I grew up. This beautiful little 8 mile-long river runs through the Jonathan Dickinson State Park, and is the only Florida river to earn the 1985 distinction as an original Wild and Scenic River. (Similar to the St. Croix’s protection, see River #6.) We had arranged to rent a canoe from CANOE OUTFITTERS (561 – 746-7053) who explained that the river was so low that only a brief two mile section was still navigatable. We were instructed to paddle up to the spillway, then turn around and paddle back against the current — a current so mild due to low water that we would hardly notice, he assured us.

The white sandy path to the put-in was palm lined and cicadas rose and played their wild songs in the tangled woods as we passed. A gigantic black cloud bank towered over us, Florida style, and a light rain fell just as we arrived at the dark bank of the river. The rain cooled the hot, steamy air and we set out amid giant drops that made the huge overhanging elephant leaves bob as we paddled by. After a short paddle to a bridge the tree canopy closed over the river and the tropics sealed us off from the busy world.

The river narrowed, twisted and turned. Palms arched and one had fallen perpendicular across the river. Giant ferns grew out from the bank, wild lily plants spiked and bloomed, and every black, wet log looked like an alligator. Up ahead a vine silently strangled a towering cypress tree, making us talk in a whisper when we passed. That was not the only thing that kept us quiet. The outfitter had said that the water level was three feet below normal but it had not registered until we found ourselves paddling beside giant cypress trees with all their “knee” roots exposed and evidence of the usual water mark on the huge trunk of the trees visible just over our heads. (Note the dark lines in all the pictures.) Three feet below normal! It would take several hurricanes and many years of steady afternoon rains to bring the water level back. The alligators that draped the banks on my last paddle here, four years  ago, had disappeared, probably looking for more plentiful food elsewhere. In addition, it was the great American July 4th holiday and we threaded our way around a couple of canoes beached on the bank, the paddlers drinking themselves silly, loud, happy, and leaving trash. It made me deeply sad to find the water evaporating and the people careless. I felt like we were in a church that was disappearing, stone by stone, drop by drop.

Florida is in a long drought and combined with a population explosion, the whispered water scarcity was suddenly very visible. We paddled back to the outfitter, stopping several times to pull the canoe over sand barely covered with flowing water. The outfitter had been right. There was no current to fight on the return trip. We

pulled our canoe over the spillway and paddled back with a bevy of older kayakers who told us about paddling the Everglades rivers. Would we find water there? I wondered.