Ian and I set off to find Jack’s Canoe Rental hidden somewhere beside the Namekagon River in Wisconsin. Jack himself had promised to shuttle us from put-in to take-out and back again. We found this tiny cabin serving as his office. It was surrounded by dozens of canoes and a line of people waiting to be shuttled to various points on this well-known canoeing river.

It was a hot and humid Sunday and the river was quiet with animals but lively with people. Once again the humans were as interesting as any wild creatures. Our first surprise came at the put-in where I waited for Ian’s return.

I met a pair of men who had spent Saturday evening building their one-of-a-kind pontoon boat and had hauled it to the river for its first voyage. They had built a platform over two kayaks with a canoe in-between. The craft could be steered by the canoeing bowsman, as well as poled by the other passenger on deck. They had spray painted the platform a rough camouflage green. They spent well over an hour on shore imagining how it might perform, and naming it. They decided on: The Green Party Platform. They set off and disappeared around a curve in the river and all was quiet once again. Hours later we found them alive and well, shooting fish with a cross bow. At our passing the fish were still winning.

The Namekagon starts in northern Wisconsin and winds its way to the St. Croix River.

The St. Croix serves as a border to Minnesota and Wisconsin and both rivers are protected by the Wild and Scenic Rivers Act, (1968), a visionary piece of legislation that protected 8 rivers in the United States from development. The early part of our trip found us paddling between sandy banks and spiky pines. The heat hushed the shoreline and the lack of bird song was eerie. The water was startling clear, shallow in patches, and filled with schools of fish. Throughout the day we crossed paths with a three-canoe family who was traveling with Sierra, a perky beagle. At one crossing I saw him perched upon the thwart (wooden cross piece) and the gunnel (side), nose up, a fine river-worthy dog!

We made a rest stop at the end of a series of Class I rapids. An osprey dived for a fish in the riffles and suddenly stopped mid-air, soaring away.

A tiny butterfly took a liking to my finger and returned again and again. Throughout the afternoon the river gradually changed from pine to hardwoods as the slow gradient took us toward the confluence of the St. Croix. House sightings were very rare but when we rounded the bend where the waters from the two rivers met, this tiny cabin sat watching those two rivers blend their waters.

We headed south, downstream, along the St. Croix and as the afternoon sun set we

passed a swamped canoe (they needed no help they said, though it was their fifth dump of the day!), a flock of ducks basking on the rocks, and a huge log held prisoner high and dry on a rock. It had been left behind months ago by spring’s high waters. I wonder when the river will rise enough to free it and send it floating off to the St. Croix, then to the Mississippi, or maybe all the way to the salty Gulf of Mexico? 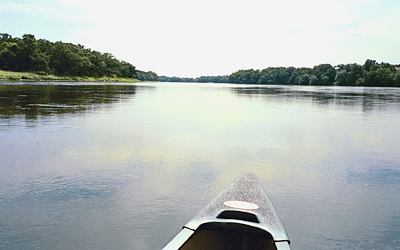 At the last minute Ian and I moved from the waiting list to a spot on the Friends of the Mississippi’s group paddle down a twelve mile stretch just north of the Twin Cities of Minneapolis and St. Paul, Minnesota. Early Sunday morning we joined fifty-three other paddlers at a roadside park in Elk River where we dropped our canoes and supplies. We drove to Anoka where we left our cars and boarded a school bus that would shuttle us all back to our boats. As it was our first group trip we had to learn PATIENCE as we waited for all of our fellow travelers to gather their things and be ready to go. (The bus was hot. I had time to learn a lot of patience.)

We traveled in a flotilla and were led by our marvelous Park Service guide, Kate. She paddled a small solo Bell canoe. She told us the amazing story of having driven this very canoe to the Green River in Colorado where she paddled alongside a group of rafters on a five day river trip. She managed all of the rapids with only one early spill. Kate “loves rivers,” and she inspired me with her ease, her commitment to river preservation, and her careful solo paddling style. (Keeping a canoe on a straight course by yourself is not easy.)

This particular morning the air was still and clouds moved in and out, drawing their reflections all around us. The great river widened. One man told stories about the early explorers dragging boats for miles along the shore because they did not know how paddle a canoe in shallow waters. The modern paddlers moved in and around each other, fluid, and eventually we met the amazing Ann.

She paddled an inflatable kayak and proved to be a true Mississippi River woman​.In the summers she lives on a houseboat that floats on the Mississippi, in St. Paul. She’s read more books about the river than anyone I know and taught herself to steer her houseboat “by making mistakes,” she said.

We stopped for lunch and rest and then paddled into the big heat of the day. But the river brought one more boat for us — A canoe so beautiful that it cast a spell on me…We had passed it early on and I wondered at its age, and its beautiful wooden gunnels, and the stories of its hundreds of dings and scratches.

It turned out that owner received the canoe when he was a young man, in 1978, and he has paddled it a thousand miles in the decades since — The longest trip arched up to Hudson Bay. Now the owner, Whitney Clark, paddles this canoe in his job as executive director of the Friends of the Mississippi River. He talked about how he could get a newer canoe, a sleeker, lighter canoe, but the history is too deep and it’s the only one canoe where he feels at home…Someday I hope our canoe looks like Whitney’s. (Visit the Friends of the Mississippi River’s good work at www​.fmr​.org) I asked Whitney…What river would you recommend for our 50 rivers project and he paused only for a moment… “The Hayes,” he answered. “Canada.” “You’d have to fly in but that’s easy these days…”