June 28, 2003—In the southeastern corner of Minnesota the Root River cuts a deep gorge through more of the “driftless” region, that higher ground that the last retreating glacier did not grind down to flat plains. Ian and I selected the section of river that runs between Chatsfield and Lanesboro, a stretch of water that is well known for the clear trout streams that flow into the Root River. The surrounding area is filled with rolling hills, pristine farms, and large stands of forests. We put in at the Chatsfield Bridge but not before being saved by the generous shuttling of our breakfast volunteer, Kay. I followed her car down lonely gravel country roads until we found the take-out at Moen’s Bridge. We dropped my car there and she kindly took me all the way back to where Ian was (almost) patiently waiting with our canoe to begin the trip. (Thank you, Kay, wherever you are!)

The weekend had brought dozens of canoes to the river but after the first big bend never saw another boat. ‑Limestone cliffs line sections of this river and we paddled
close to the undercut arch of one. We were astonished to find dozens of swallow nests clinging to the cliffside. They were equally astonished to find a pair of humans suddenly below them and in quick succession the small birds fired out of their nests, one after another, right over our heads. The nests are constructed of clay, tiny drip by tiny drip, like a mud castle. They start with a wide, basket-like shape that hugs the cliff, and leave the last bit open for coming and going. Throughout the day we passed many of these swallow villages with the birds’ bobbing beaks and shinning eyes just barely apparent inside the nests, followed by sudden swoops of wings.

I am beginning to sense that every river has a character of its own and this one could only be described as the Musical River. Small birds filled the trees, skies, and water way. While they flitted every-which-way their songs rose and fell with the passing bluffs. They seemed to make the air into a visible place, drawing long lines f

rom tree to river, river to tree, darting and gliding, always busy singing.- We had an early lunch, stopping at a canoe camping spot (which are marked by this wonderfully clear sign) and imagined the last campers who left the wooden spoon on the table. We passed a private campsite that had a tent, hammock, and its own ladder leaning against the steep bluff. These high bluffs so tightly hugged the river banks that we paddled another nine miles before finding a place that would allow us to pull up the canoe for a much needed rest. We scrambled up a steep muddy ledge to find a grassy clearing next to a huge corn field where we could listen to the birds and the wind in the deep quiet.

When Moen’s Bridge came into sight, the afternoon was easing into evening and the map showed we had traveled thirteen and a half miles. We hauled everything out, strapped the canoe on the car and headed back to Minneapolis. The world of noise and traffic and roadside restaurants made our human villages look especially careless and harsh after the musical beauty of the river-world.

June 15, 2003—Our expedition left our house with three canoes atop three cars, enough for neighbors, kids of neighbors, friend of neighbors, and my daughter. We headed to Minnehaha Creek, the meandering, tree canopied, narrow stream that runs through south Minneapolis. We had a picnic packed and were delighted to be joined by Nat and Dan, two expert paddlers who have made many trips to the wilderness Boundary Waters bordering Canada, including a forty-five day canoe and portage trip from the Back River (Northwest Territory, Canada) to within 150 miles of the Arctic Circle.

This time our ribbon of water offered human sights — we paddled passed a gorgeous white-gowned bride having her picture made beside the creek. We passed houses and tennis courts tucked among the trees. We scooted under numerous stone bridges and came to a sudden and unexpected “Portage Here” sign. (When a canoe is carried on land it is called “portaging.”) We debated ignoring the sign and paddling past it

before deciding to obey the directions. Nat lifted our 68 pound canoe on his shoulders like it was no more than a sack of potatoes. (He says there is a method to getting a heavy canoe onto your own shoulders: First, make a ledge with your knees and slide the boat up, then flip the canoe over, ducking under it as it comes over. Push up with your knees. Be sure your shoulders are padded.) This portage took us out of the quiet steam and into the busy traffic of Penn Avenue. As it turned out, the portage was due to construction work on the bridge and a bulwark of steel would have met us had we tried to ignore the sign! (Lesson: Portage when told to do so!)

A couple of hours into the trip starvation struck and we had an emergency exchange of the potato chip bag, mid-stream. Our lunch stop finally arrived and we scrambled out for a picnic. At the last minute Jerry had remembered to bring a book (found in a furious search of his car trunk). Over lunch he read from JEWISH HUMOR and made us all laugh.

Back in the canoes we followed the twisting creek through a small spillway, then past the esteemed Hiawatha golf course where the sign actually tells canoeists to watch out for whizzing golf balls. The water was high throughout the

paddle and we had to lay low to slip under all the bridges. The boys took a quick dip in Lake Nokomis, easing in and out of the canoe without even as much as a wobble. (This is NOT easy to do!) At Highway 55 we hauled our canoes up the reedy bank to where our car was stashed for the shuttle back to the put-in. (One lucky person gets to stay back with the canoes, reading and daydreaming, while the others drive for the cars.) This creek is lovely and a wonderful afternoon paddle right in the heart of a big city.

June 10, 2003—For River #2 Ian and I headed south to the Cannon River, a mutation of the words “River of Canoes.” Long ago this river was used by Indians and the French to reach the buffalo fields of the plains. They would travel upstream from the Mississippi and often along our trip we imagined the light, empty canoes headed inland and the heavy buffalo-filled canoes riding the return current downstream…But. Before we could imagine the Indians silently passing us I had to get us lost coming out of the Twin Cities, AND THEN, having finally found the tiny, winding dirt farm road where we would stash our second car for the take-out-THEN — I realized I had forgotten to bring our second and third paddle! 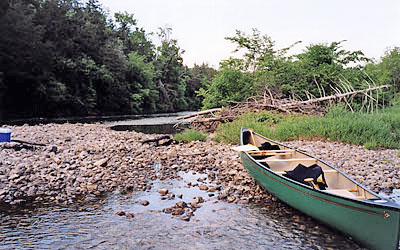 salvaging- the trip by finding a paddle to rent or buy. There, in a dusty old hardware store we found, high on a shelf, a long thin wooden paddle for $15.99 and the trip was saved.

We put in at a small park and found ourselves catching a few rapids, passing under a railway bridge, and then sailing down a swift current between wild river banks. Early in the paddle a giant bald eagle few right over us. It was being chased by a tiny black bird who seemed to be teasing it from behind. The eagle swept down the river and landed on a high branch where it joined another eagle. It was astonishing to see the two giant birds peer down at us as we paddled under them. I have never seen such a sight.

The water was higher than usual in the Cannon River and the full-water current made our paddling this gentle stretch of river nearly effortless. This river runs through what is called “the driftless area” of Minnesota. The glaciers missed this
slightly higher area of ground 10,000 years ago so rather than the flat, glacier-ground plains to the west, this region retained its limestone cliffs. The river now cuts deeply through the bluffs. We stopped on a rocky island for a late lunch. (Menu: tabouli, humus, pita bread, apples, and a Snickers Bar.) Ian found a dragonfly, papery and dry. The bottom side of the river’s rocks were covered with the tiny, gooey eggs of flies, the same flies we supposed were swerving all over the river’s surface as the sun moved deeply west. Fish were beginning to rise for their evening meal and the river felt alive when we shoved off.

My favorite moment on this river was coming up to a bend where a giant heron rose off ‑the bank and passed us on the left. The river turned right, then left, and the wind picked up and, in the shimmering of late sun, the air was suddenly filled with

the airy white puffs of milkweed and cottonwood. We sailed around the blue water bend with the fluff of summer snow spinning around us.

The trip ended too soon as Ian’s old Trooper appeared beside the river. We hauled the canoe up to the road and stopped to watch the trout rising just off the junction of Trout Creek and the Cannon River. We promised that next time we would bring our fly rods. 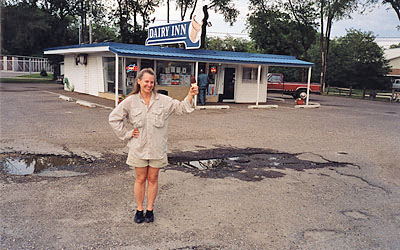 The ride back to my car in Cannon Falls seemed short, the summer sun still lighting the farms. When I’m off the river, the blue ribbon of water, I miss it immediately. The land seemed so still. But every canoe ride deserves celebrating. Which we did, at the Dairy Inn.