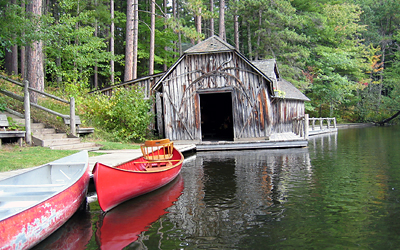 I promised myself that when I finished the pictures for The Incredible Water Show I would head to the Bois Brule River. Immediately after driving the boxed pictures to Fed‑X (for the second time) I headed north, meeting Amy, Steve, and Ian in the tiny town of Brule, Wisconsin. Rain was predicted for the next day but we decided to prepare for any weather and stick to our plan. Early the next morning we ate breakfast under gray skies and crossed the street to the Brule River Outfitter who would shuttle us (with canoes) down to Stone’s Bridge for the start of our sixteen mile paddle.

The Bois Brule River basin was created as the last ice sheet retreated. The rushing southern flowing meltwater carved the river’s valley but eventually the meltwater tapered off. These shallower waters met the ridge between the St. Croix and the Bois Brule and were forced to slide back, finally reversing the water’s course. Today the Bois Brule drains out of the bog created from those early meltwaters, and still empties into Lake Superior.

On this Friday morning the rain hung heavy in clouds. It stormed to our right and our left, but not a drop fell on us. We set out between the pine and cedars hugging the narrow river and paddling around our first bend we were Fall-Struck by a tree turned brilliant gold. The water was so still that every leaf shined twice, once on the tree and once on the river. Steve turned out to be a very good paddler and one of his tricks was a mid-water exchange. It is best explained by pictures.

Much of the river runs through the Brule State Forest but a long section in the middle is privately owned.

This section includes Cedar Island Estates, a group of log and cedar lodges and cabins built on 4,000 acres. Five presidents have visited this river to fish, (the only river to claim so many presidential visits), three of them staying at Cedar Island, and all of them probably crossing this old foot bridge linking the homes. (The Presidents include: Grant, Cleveland, Coolidge, Hoover, and Eisenhower.)

Most of the upper Midwest was logged in the 1800’s, and some areas have been logged yet again. Along the Bois Brule an occasional old growth pine had, for some unexplainable reason, been left standing. The sight of our first magnificent, giant tree took our breath away – it was royal, magical, towering, and strong. My awe was so great that I forgot to reach for my camera before we floated past.

After the majestic old tree we came upon a short Class II rapids. I would have portaged the rushing water but Steve said we could do it easily. We beached the canoes and walked the rapids, planning our route. Our traveling companions went first and Ian and I followed. Steve took this Black & White picture just as we sailed into safety, dry and happy!

We lunched next to a tumbled down picnic shelter. The sun came out to join us, and the tiny grove of trees looked like a scene from the Shire in Bilbo’s day. (Ian and I listened to the The Fellowship of the Ring (by Tolkein) on tape as we drove to our rendezvous.)

Later the river widened into two long thin lakes and twisted past huge log homes that often had boathouses floating on the river. This one had only red canoes and inside that dark door hung a long row of carefully stored red-handled paddles. The sun joined us again and the banks lit up with color, setting the river on fire.

The next stretch of river was peppered with rocks that had to be dodged and the canoe rocked many times. Please remember that I am a fourth generation Floridian. There is nothing a Florida native hates more than the thought of a cold water spill so when the roar and tug of Little Joe Falls reached us, I was ready to portage.

Just short of the falls we beached the canoes and walked the steep, slippery scouting trail. It was clear that it would be impossible to carry the 17 foot Lunar Eclipse over this path. We studied the rocks and discussed a route through the rapids: Enter center, then veer sharply right, watch the boulder at the bottom. Back at the beach we secured everything to the canoe, and checked that all cameras were double bagged. I stripped down to a single layer so I’d have plenty of dry clothing should we tumble in the cold water. I was certain we would soon be wet.

Amy and Steve went first. We could not see them but we heard their victorious cry. They’d made it! Far above we pulled off shore and sculled at the top of the rapids. Amy signaled the path to the right and we shoved off. The river caught us and I barely remember anything but white froth and wet rocks shooting past, then the huge boulder suddenly popping up right in front of our canoe. I made a quick draw stroke and Ian steered hard from the stern. We flew by. When we joined our partners below the falls I realized I wasn’t WET! I went ashore to dress warmly again and we were off to paddle the last few miles of what Ian called his “favorite river, yet.” 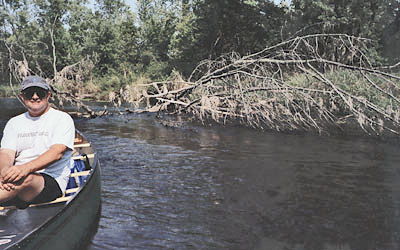 Jim and I set off for our first paddle together on Wisconsin’s Red Cedar River. We couldn’t find the put-in on our map and had to find a new starting place, adding an extra four miles to the trip. Our late departure worried me. Could we paddle the fifteen miles before dark? We then shuttled our own cars back and forth three times before eating a quick lunch and shoving off into the clear river.

I sat in the stern (back) and was able to practice my steering, which required immediate attention as we headed down a small Class I rapids within a minute of setting out. But quickly the water began working its magic. I was calmed by the pace of steady paddling and the slow way the world unfolds from a canoe. The Red Cedar River runs through farmland and often the arching rows of corn ran right down to the river, and the occasional cow chewed and watched us paddle by. The river was shallow. Long lengths of bright green grasses grew in thick clumps, brushing the surface like watery hair. A snapping turtle dived next to our canoe and swam like mad before peeling away to the shore.

A huge bald eagle surprised us by swooping down across the narrow river. He surprised us even more by accompanying us nearly the entire afternoon, flying off high branches as we approached, sailing down the middle of the river and disappearing again. Once Jim said, “Where’s my eagle?” and just then he appeared above us, quiet, watching from a branch.

Early in the trip we came to a “strainer,” which is a downed tree that lies across the water. This strainer had plenty of unobstructed river to the right, but nonetheless, a downed tree always make me a bit nervous since our Rice Creek paddle. (River #1) That day the creek’s rushing high spring water sent us crashing into a dozen dangerous strainers. I felt the grip of those claws once when my life jacket was caught by a stiff branch and the current was too stiff to resist. But today’s shallow river flowed with the gentle current of late summer and we slipped by without a scratch.

We paddled on through the clear water and the green grasses and then suddenly, everything changed.

The bottom of the river turned black. The flowing grasses were only stubs of bare stems. Dark algae grew on everything. No fish. No turtles. It was like seeing Isengaard after it was burned in Tolkein’s Two Towers. The devastation was probably due to agricultural runoff of chemicals and the river had suffocated. We paddled another mile before the healthy bottom began to return. It was shocking to see the difference between a living stretch of river and a dead one. The day was hot and we stopped on a tiny island’s rocky point to rest. The water was too shallow for swimming so I sat in the rushing current and tried to find a rock to match the perfect egg shaped rock that Jim had found. (no luck).

Our eagle had one more surprise visit in store for us – We spotted him high above and slowly paddled toward his perch. He let us get closer and closer until we glided right under him, so close we could see his huge golden claws gripping the bark. The day was darkening and we still had a couple of miles to go so when a double strainer loomed out from both banks we decided to take the shallow route around the tiny island, avoiding the strainers altogether. We had paddled only about twenty yards when a huge beaver dam blocked our path.

We paddled back to the main river where we paused on the muddy shore to assess our situation. We had to cross the current to a tiny inlet on the other side and then shoot back through the narrow opening perfectly or fall into those claws.

We were careful and our aim was perfect. We sailed through the narrow break in the trees and found our takeout just as dusk settled on the river.